​​The History of the First World War is a deliberately concocted lie.  Not the sacrifice, the heroism, the horrendous waste of life or the misery that followed.  No, these were very real, but the truth it all began and how it was unnecessarily prolonged beyond 1915 has been successfully covered up for a century. Throughout the centenary years we will vigorously challenge the received history of the war, and the plethora of newspaper articles and television programmes cobbled together and repackaged by the establishment media to complement that history.  We will unmask every lie and present hard factual evidence that clearly demonstrates how a secret cabal of elites in Britain were responsible for the tragedy as it unfolded. 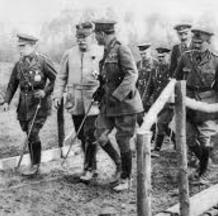 Unmasking The Myths & Lies Of The First World War